Bill Adams, CCIM, Michael Reeves, CCIM, Jim Camp, CCIM and Marion Williams, CCIM of Adams Commercial attended the Georgia CCIM Chapter’s meeting in Savannah on March 3rd and 4th. It was impressive to learn that Savannah is currently seeing a 5.8% increase in multifamily development and a 6% increase in industrial development, and we were thrilled to see some of Savannah’s most exciting projects during our trip.

More than 50 CCIMs from around the state attended the meeting which included a tour of the Port of Savannah and a presentation by the Georgia Ports Authority. The port is the third largest container port in the U.S. and the Garden City facility, at over 1,300 acres, is the largest single operator container terminal in North America.

The CCIMs also toured Savannah’s westside Arena and Canal District anchored by the Enmarket Arena, a new 9,500-seat sports and entertainment facility. The district will have green spaces, public spaces, office, residential and retail developments, and it will have a direct connection to Downtown Savannah’s Historic District. 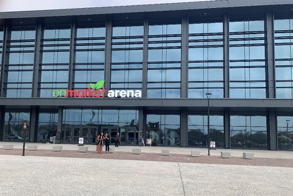 Finally, the CCIMs toured the Eastern Wharf Development, a 54-acre mixed use development on the Savannah River, east of the Historic District. The project includes a 12-story hotel, office, retail and residential properties. The development will include green space and an extension of the River Walk path that will connect the project to Savannah’s River Street.

Bill Adams, CCIM said that he was “impressed by the scale and quality of the development projects in Downtown Savannah.”  Adams was also “amazed by the size of the port and its role in making the State of Georgia a logistics hub for the East Coast of the United States.”

We look forward to seeing the new development in Savannah come to life in the coming years.